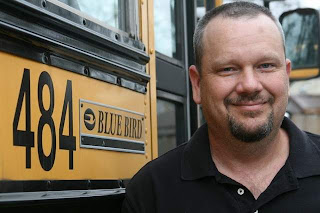 School bus driver Ricky Graves was honored for his actions to keep students safe as 50-car pileup unfolded.
On December 1st, what seemed like a normal bus route was disrupted by an oncoming truck. When Ricky Graves noticed the headlights shining through the thick fog, he pulled his bus to the right while the car beside him went left. With fourteen students on board, a head-on crash would have been disastrous. Thanks to Grave’s fast thinking and quick reflexes, no one on the bus was hurt.
The students and Graves then watched as car after car sped past the bus and into other cars. Which resulted in a fifty-car pile up. As Jeeps were spinning by and other cars were going up in flames, Graves and the students on board sat in an anxious silence. Even as a camper scraped against the bus, Graves kept the students calm and remained in control.
Ricky Graves is truly amazing, and deserves everything he has gotten: a certificate of appreciation. He saved the lives of fourteen people, not including himself. Then he waited for two hours with the children until things settled down and help arrived. Even then he loaded the children safely onto another bus and sent them to school, staying behind to transport people involved in the crash to Sumner County Administration Building–truly spectacular.
If you want to read more about Mr. Graves, then click on this posts title, and the link will bring you to the original story.
Thank You,
Haleigh