Schools everywhere experience budget cuts, some are over a million dollars in the last few years. How do they make up for the lost money? Kids still go to school, and the number of children in school is increasing every year. With less money and more students, how can schools keep up?

Schools in Arizona, Colorado, New Jersey, Tennessee, Texas, Utah, and a few others have tried to make up for the loss in a rather out-of-the-box way, by putting district-approved advertisements on school buses. Where and how big the ads are depend on the regulations for each district. Other states allow only interior ads on the buses. 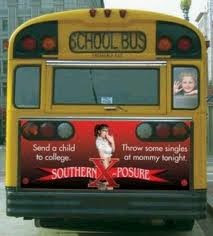 This method has brought in a considerable amount of money for the schools that use it, but is it safe? The reason school buses are yellow is because people notice them and tend to be more careful. If an ad is on the side, then you have drivers getting closer to the bus so they can read it. Instead maybe it’s on the back, and other drivers notice the ad but not the brake lights.

Does it really help more than it hurts? The schools need money, but is putting the students at risk really the way to do it? There are no in-depth studies on this topic as of yet and until there is, I have to question whether or not it is okay.