In Lawrence, Michigan 80 people participated in a training exercise in which they entered a school bus that had been turned on the side. They also got to experience being in a smoke filled bus. This massive event was sponsored by the Van Buren Intermediate School District (ISD) and Lawrence Township Emergency Services. 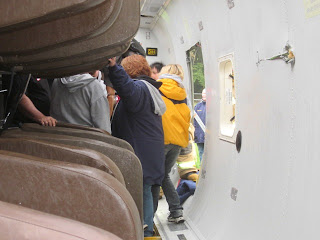 Featured above in an image taken from the rear end of the flipped school bus. This shows just how little space there is to move around. This image also provides a message about how tricky it can be to get to the exit if needed.  It should also be noted that the whole these people are shown exiting through is not the roof hatch emergency exit. That whole was made by the fire fighters who were able to practice their rescue methods. The roof hatch is pictured to the right of the whole the people are shown walking through. Notice the size difference and imagine how much trickier that would be to get everyone out of. One woman in the drill said, “The student strapped into the wheelchair was a real eye-opener for me.” She is referring to the mannequin who was strapped into a secured wheel chair in the back of the flipped bus. 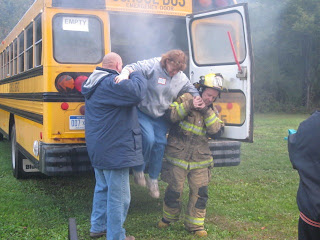 They group was also able to experience what it would be like in a school bus filled with smoke. The smoke in this case was non-toxic vapor. They were then asked to run through an exit drill, the image above shows the proper way to exit through the back of a school bus. One person said this after their experience, “I could not believe how disoriented I became in the smoke-filled bus.” Not being able to see whats going on is a terrifying experience and when your in an emergency situation such as a school bus accident, the smoke  is one huge handicap against you.
After experiencing the two bus exercises the group was also taught the proper method of extinguishing a fire and how to use and extinguish road side flares. After the day was over one man said this, “I came here today because I had to, thinking this was a perfect waste of time. When I got into the cut-open bus and later the smoke-filled bus, I changed my mind. This was the best day ever.”
Running this drill is such an awesome idea and it is one that is so helpful to all who not only run it but all who are able to experience it. Hoglund Transportation took part in one of these over 30 years ago and would love to do it again. To read the full story click here.
Thank You,
Haleigh