A 12 year-old boy set his school bus on fire during its route back in mid-march. It was just shy of 8:30 am when the boy ignited a marine flare resulting in the student-filled bus going up in flames. As soon as it went off, the bus started to fill with smoke and all the students and the driver were evacuated immediately. The students were stranded on the side of Chestertown Road (Route 20) for some time before help arrived.

Seven students were taken to Chester River Hospital and treated for minor smoke inhalation, while the other 21 were removed from the scene and brought to Chestertown Middle School. All treated students are fine, and were released immediately from the hospital. The school bus on the other hand is a complete loss with an estimated total of $45,000 in damages. 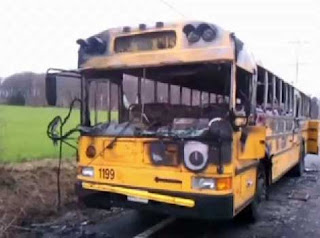 The boy who set the bus on fire has been charged with first and second degree arson, first and second degree malicious burning, bringing a deadly weapon on school property, carrying/transporting a handgun, disturbing the peace and 28 counts of reckless endangerment. It is a shame that one student’s less-than-stellar idea can cause trouble to everyone around him.