When I was in elementary school, the first thing I did after boarding the bus, was turn around and wave goodbye, knowing that someone would always be there to wave back. Over the years, I stopped waving, and eventually I stopped looking back altogether. When I saw this father’s story, it reminded me of when I used to look forward to seeing someone wave at me on the bus. It also made me smile and want to share it with the readers of this blog. 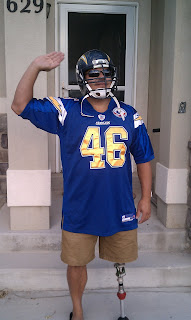 In the Image is Dale Price, day 2 of waving at the bus…

Dale Price, spent this last school year waving at his 10th-grade son as he rides by on the bus. It started as a joke, just to embarrass his son. After he saw how people reacted, he was encouraged to keep going, and he did. The next day, Dale stood on the porch in a Chargers’ helmet and jersey, just to wave at his son’s bus. After that, he would get up early, and put on a different costume each time to wave as the bus drove by his home. This went on all year, 170 days! I am very impressed by this father’s effort to both amuse and embarrass his son. After awhile he started to get more attention, was in the news, on a radio show, and now his story is nationwide! There is a blog with pictures of all his costumes if you are interested in being amused, the website is: www.waveatthebus.blogspot.com.