I have a favorite story, though it might not be fair since I have read a lot of great ones. This story was about a man and his admirable attempt at embarrassing his 10th grade son. If you clink on this http://hoglundblog.blogspot.com/2011/06/do-you-wave.html it will bring you to the original article I wrote back in June of 2011. To sum it up, Dale wore a different costume everyday of the school year and waved at his son’s school bus as it drove past their home.The son, Rain, took it with good nature, and the rest of the bus, along with the world sing Dale’s praise. 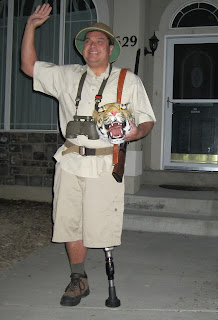 Above is Dale Price, waving at the bus.

Dale Price never really pondered over what the other kids thought of his costumes from day to day but he thought more than once about what the bus driver had to say about it. Price remembers specifically contemplating what the bus driver might think: “‘I wonder if he is going to call the police or something, there’s some kind of weirdo waving at the bus, but I saw him smiling and he would wave back.”

Now Dale finally has his answer, Myron Carlson, who drove the bus down Price’s street, met him and told him: “You lifted all of the spirits of all of the kids on the bus.” Sorry Dale, but Myron was far from setting the cops on you. Just as the rest of our world did, he was laughing with you.

I’m happy Dale got his answer, but I’m even more excited that his story is know around the world! I look forward to stories like these when I’m reading through bus articles online, this one is my favorite.