Aaron Gunderson, a 32-year-old man, was finally sentenced for his actions taken on May 10th, 2011. On that day, just before eight a.m., Gunderson passed a stopped school bus; the bus had its lights on and its stop arm extended. Ignoring the obvious signs, he sped past and struck a 7-year-old Kadyn Halverson with his truck while she was crossing the street to board her bus. Then, for one reason or another, he fled the scene in his truck, leaving Kadyn on the side of the road where she died from her injuries.

With 12 students and bus driver serving as witnesses, Gunderson was eventually found and taken into custody. During the plea change hearing, Gunderson said that he never saw the stop arm or lights on the bus, and that he didn’t think the bus was stopped. In the end, since he plead guilty to vehicular homicide by reckless driving and leaving the scene of an accident resulting in death, he got a total of 15 years. Ten years for the murder, and five for fleeing the scene. The more serious charge of vehicular homicide while intoxicated was dismissed as part of the plea agreement with the prosecutors. 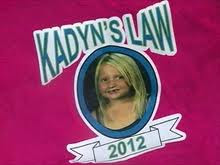 My heart goes out to Kadyn’s family, as well as any others who have experienced a similar tragedy. I can only hope that Kadyn’s Law comes through. Kadyn’s mother, as well as others who support her, are lobbying for a new law. They are asking legislators to increase the penalty for motorists who drive by a stopped school bus that has its lights flashing and the stop-arm extended. The group also wants video cameras mounted in school buses to record violations.

Good luck with the law. I believe it is something that should have been done long before anything this tragic had to happen.