Lake Elsinore Unified School District (LEUSD) board members eliminated the home-to-school transportation program for students in LEUSD for the 2012-2013 school year. With schools’ budgets being continuously cut, and busing being a major cost for any district, sadly, this is not an unforeseen turn of events.
The average cost for busing and special needs transportation is over $5,000,000 for the 2011-12 school year, and state funding for both programs only totaled $2,096,717. Anyone can see that there is a disconnect between what is given and what is spent. The law states that the district is required to provide busing for its special needs students, for which the cost is predicted to be around$2.5 million for the 2012-2013 school year. 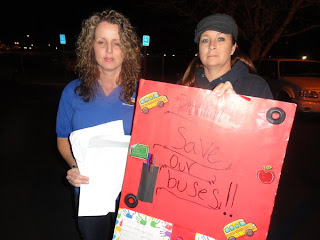 Pictured above are some of the ditricts drivers who showed up to speak against the school bus cuts on Thursday evening.

Residents voiced their concerns over this change to the LEUSD school board Thursday night. Some concerns were about the students being too young to walk so far, and some mentioned that it is too dangerous to cross over some of the main highways. One man brought up the attemped kidnapping that happened on Monday, saying that it could be too much of a temptation to put all those children on the roads daily.

I hope that the board, somehow, is able to find room in the budget for busing, and that the children are safe either way. I was lucky enough to have had busing as a child and never had to worry about it being taken away. I only wish that I could say the same for these kids.